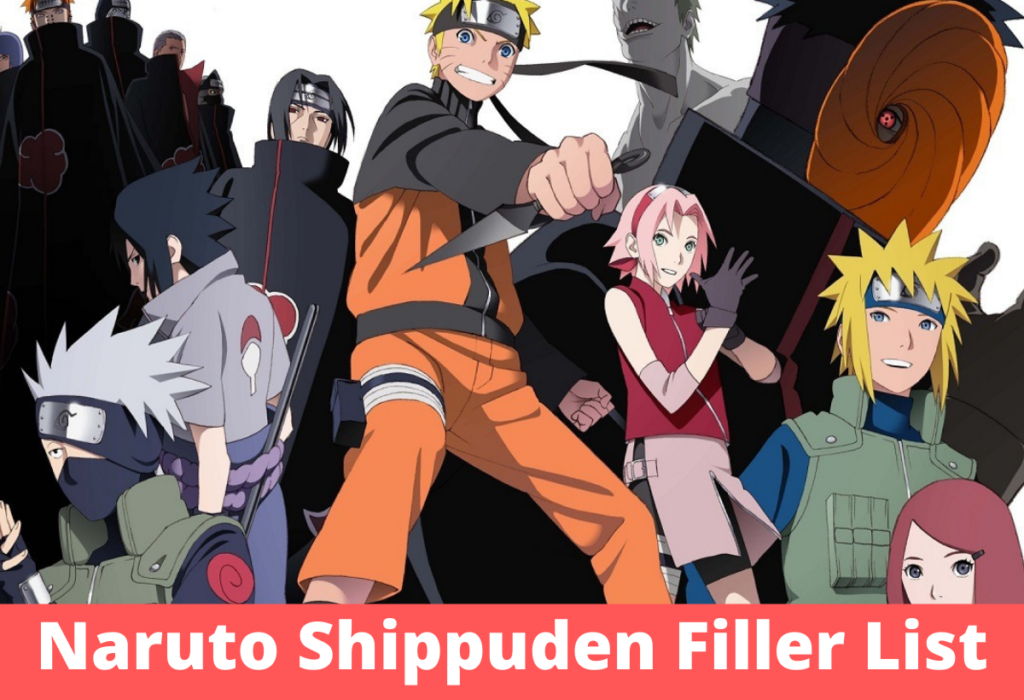 This exclusive Naruto Shippuden Filler episodes List will guide you to stream your favorite episodes to watch without missing the actual plots.

Have you just started watching Naruto Shippuden? That is no surprise you would be able to detect the filler list in the story. They are commonly part of any anime series to lengthen the overall story without impacting the core plot.

Sounds great, right? Then, continue reading all the way through our Naruto Shippuden episodes.

“Naruto Shippuden” is a sophisticated anime masterpiece in which one dynamic plot arc leads to the next, culminating in Naruto’s captivating hero’s journey.

And then it concludes on Naruto becoming vehemently stronger and joining his comrades in the Fourth Great Shinobi War for the sake of humanity’s future.

You could be thinking about what are filler episodes?

Filler leads your favorite anime to stay on the air for long to convey the entire tale from its manga source. Masashi Kishimoto, the artist, and creator of the “Naruto” manga put in a lot of effort to produce engaging comics on a daily basis. This is why long-running series like “Naruto” and “Naruto Shippuden“ produce non-canon episodes that add next to nothing to the plot.

Because filler list episodes are not based on the manga, it does not follow the original plot. All the episodes mentioned below are Naruto Shippuden episodes to skip;

Episode 271 exists solely as a promotional piece for “Road to Ninja: Naruto the Movie,” and it should be noted that none of the films is canon, but they are entertaining.

Fillers you should watch:

These episodes of “Naruto Shippuden” contain interesting plots revealing some fascinating new powers. Any ninja story famous for fighting monks is always amazing, and we witness a Land of Fire monastery full of tough fighters.

Several Akatsuki members demonstrate their strength by eliminating some extremely powerful monks in order to collect bounties on them, including one monk who uses the Welcoming Approach: Thousand-Armed Murder Jutsu, which appears to be a precursor to later Justus manifesting powerful larger beings.

Furthermore, these episodes suggest that a fighter can have some tailed-beast chakra and yet get the advantages. The idea that a portion of a tailed beast’s chakra may live inside someone, transforming into a partial Jinchuriki, and even granting the tailed-beast cloak to fight off with might.

Episodes 349 through 361 covering arc emphasizes Kakashi Hatake’s Anbu past while also delving into the pasts of other characters like Yamato and Itachi Uchiha. The Fourth Shinobi World War: Climax is the best setting for this arc.

In this arc, set shortly after the Five Kage Summit and amid the imminent threat of a Fourth Shinobi World War, Team Kakashi is ordered on a mission to investigate the murder of Tonika Village by Kabuto Yakushi and his resurrected shinobi, who are searching for a treasure of tremendous power. This arc takes place during the Fourth Shinobi World War: Confrontation.

“Gotta See! Gotta Know! The Real Kakashi-Sensei!” is the first episode of the Naruto anime. Naruto had proposed two others, Sakura and subsequently Sasuke, to jointly investigate what was behind Kakashi’s mask after being convinced by the former. They were no match for Kakashi, who threw them off his track again and again.

Naruto questioned Kakashi directly about what was behind his mask as the squad was leaving for Konoha following the assignment.

Filler, but you can watch some:

Containing a narrative about Orochimaru’s collapsed empire’s remnants, but you may skip watching it. Still, it is worth watching only to witness some incredible fights and learn the fascinating new Jutsu.

You may also witness the Four-Corner Sealing Barrier being deployed on a tailed beast, which will play a key part in the Fourth Great Shinobi War’s conclusion.

Watch episodes 100 to 112, but if you want to grasp the entire arc, you should watch all of them.

At the very least, watch Episodes 100 to 112, however, if you want to grasp the entire arc, you should watch all of them.

Filler, but interesting to watch:

After the big arc where Pain destroys Konoha, only to be saved by Toad Sage-mode Naruto. Despite the fact that Konoha had been devastated, Pain was able to bring its residence back to life following his discussion with Naruto. And the child who was once ostracized and dismissed as a knucklehead has become a village hero.

Although, none of the episodes modifies or add to the tale being interconnected with the main plot. Still, if you possess the interest not to miss anything, you can safely watch these filler episodes.

Filler, but you need to watch it:

This run is technically filler, but it’s extremely an amazing filler — to the point that you might not even realize it’s not manga canon if you don’t know.

Episodes 347 and 348 go into further detail regarding the Akatsuki’s origins, especially the circumstances that turned the noble, peace-oriented Akatsuki led by Yahiko, Nagato, and Konan into the wicked-criminal Akatsuki we now know.

If you enjoy Kakashi as much as everyone else, episodes 349 to 361 contain some fantastic and entertaining chapters about his Anbu years. This connects young Yamato and Itachi, and the chock-full of wonderful sequences centered on young Kakashi. The sight of this young chunin battling together is worth the price of admission.

So, just watch the entire series and clip out the episodes that you don’t want to see.

So, fine, just watch the entire series and clip out the episodes that you don’t want to see.

These mostly Naruto Shippuden Filler episodes are not based on the manga, but instead contain parts of the original plot, with just the minutes noted.

The Sound Village Four are resurrected in episodes 303 to 305 for a rematch with the Hidden Leaf shinobi who first battled them in “Naruto.” Not only is it worth seeing for the rematch, which features a much stronger Leaf shinobi, but it also addresses the notion of friends being separated and fighting their way back together.

Episodes 307 and 308, as well as episode 317, are about another reanimation with profound emotional links to the person he’s battling (a motif running through this conflict is these sad reunions). Furthermore, both feature past Leaf Village Shinobi against current ones.

These episodes are based on the manga, and they follow Naruto’s journey to fulfill his destiny with the help of his friends from Konoha and the other secret villages, as well as his long-standing friendship with his original comrades Sakura and Sasuke. This is Naruto’s bildungsroman, as told in “Naruto Shippuden.” He first appeared in the original “Naruto” series as a nuisance and a weak student shinobi.

“Naruto Shippuden” concludes with him as the planet’s most powerful shinobi, equipped with a variety of evolutionary forms that he may act as the combat heats up. Naruto starts out as a despised troublemaker, but in the end, he’s the world’s savior. Following are the Naruto Shippuden canon list;

Naruto, Sakura, and an unknown guy begin the episode by rushing through a dark-lighted tunnel-looked corridor, searching every door for Sasuke Uchiha. Sasuke draws his blade and prepares to murder Naruto as Naruto ponders how he couldn’t even save his comrade, let alone be Hokage.

2. The Akatsuki Makes Its Move

Tsunade informs Naruto that she has selected an opponent against whom he may put his talents to the test. Two ninjas knock on the door and enter before she can finish – Shikamaru and Temari, of course. Tsunade instructs Kakashi to take a deep breath and relax.

3. The Results of Training

The combined abilities of Naruto and Sakura push Kakashi to deploy his Sharingan straight away. Naruto expertly unleashes each of his Jutsu one by one. It is the Ninja Academy’s Orientation for all new ninjas. Then he runs across Konohamaru, Naruto’s temporary pupil, on his way to school.

The manga was adapted for this episode, although there are filler bits. Below are the numbers of episodes of Naruto Shippuden mostly canon list;

Naruto has a strange nightmare a few days after they fail to bring Sasuke home. Even when he wakes up, the phantoms of the dream continue to torment him.

Kakashi gives each of Naruto’s shadow clones a leaf and instructs them to split the leaf in half using their wind-nature chakra. Naruto is surprised to see that he has managed to rip a little section of his leaf, and Kakashi suggests that Naruto’s training may not take than the anticipation.

With Yamato on standby, Naruto resumes his chakra nature training, but he can only manage to shred a few leaves. Asuma loses the game, but Shikamaru’s joy is cut short when Naruto arrives, requesting that Asuma teach him about wind-natured chakra.

Naruto is a fictitious character created by a Japanese comic writer, and the comic is itself a work of fiction. Naruto and Naruto Shippuden are both set on a fictionalized Earth where individuals are born with elemental chakra abilities. In its current state, the globe is split into five major powers and a few smaller countries.

The main elemental feature of the people who reside there is used to identify and arrange these countries. In the middle of his rage, Seimei transforms into the One-Tailed Shukaku, the ultimate weapon of the fallen Shitenshounin, fighting both Naruto and Gaara. Although this appears to promise a lengthy, spectacular fight, Seimei’s defeat brings it all to a startling finish.

1) How many episodes are there in Naruto Shippuden?

2) What are the filler chapters of Naruto Shippuden?

3) Where I can watch Naruto Shippuden for free?

Naruto Shippuden is available to stream online on Hulu, which is a popular streaming service.

4) Where can I see Naruto Shippuden?

Netflix is one of the most popular streaming services of all time, and you can watch both Naruto and Naruto Shippuden episodes there. Hulu, Crunchyroll, Funimation, and Amazon Prime are among the possibilities.

5) What Naruto Shippuden episodes to skip?